Here is the first draft of the first page or two of the novel version of The Babysitter. 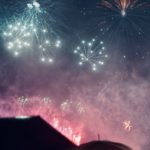 The two women staggered, huddled, arms linked, their hands holding onto a small umbrella that failed to keep the icy rain from their faces. One of the women pulled the other along, forcing her to keep pace while gripping a torch in her free hand to light the way. Their trek took them down the hill from the top village to The Forstal. It was just over a mile’s distance but in the dark and the rain and the cold wind and after a lot of rum and cokes it seemed endless.

“I need to get back, It’s Nathan’s first time without me and want to make sure he’s alright.”

“So you’ve been saying all night. He’ll be fine. Lottie’s a good kid, I’m sure she’s coping without any problems. She’s sensible. A bit la-di-da but that’s what you want in a babysitter. What won’t be fine is you pulling me over in this pissing rain and into the ditch if you don’t slow down.”

“I wouldn’t mind so much, but the party is only just getting underway. I’ve still got plenty in my tank and I feel like seeing in the new millennium properly.”

“You didn’t have to come with me. You could have stayed. Or you could always go back.”

“Nah, I don’t fancy the walk back. Not in this. Maybe we can carry on the party at yours.”

Sophie’s little torch did its best to penetrate the rain but was failing miserably.

“It was a shame about the weather,” she said, “All that money spent on the fireworks, all that planning and then this.” Sophie nodded towards the downpour captured in the beam of the torch.

Karen pulled her collar higher around her neck. “Well, at least it stopped for the kiddies’ display. For what it was worth,”

As they approached nearer to home, a few lights started to penetrate the wet night: Bright Christmas lights that adorned the houses and front gardens of The Forstal. Illuminated reindeer, glowing snowmen amongst fake snow, coloured lightbulbs hanging unevenly from guttering, the wind banging them against wooden fascias. Garden Christmas trees lit up like, well, Christmas trees, and for some reason Sophie couldn’t fathom, fixed to someone’s roof a teddy-bear in a racing car made from LEDs that flashed enough to give anyone particularly photosensitive, fits. There was everything except anything pertaining to the story of the birth of Jesus Christ.

Sophie’s house was the last in the row. On the drive was Paul, her husband’s works van. Most of the houses had vans on their drives. Vans or old cars in various states of repair. The two women hurried through the horizontal rain past the van and to the front door. Sophie handed the umbrella to Karen and searched in her handbag for her keys.

Once the door was open the tho women tumbled inside. It was then that Sophie felt uneasy. Karen was going on about whether there was any alcohol in the house but Sophie didn’t register exactly what she was saying. Something wasn’t right. The lights were on, but there was no sound. Maybe Lottie, the babysitter had fallen asleep. But she was fifteen and would have been at least watching Jules Holland or something on the television. Sophie put up a hand to silence Karen.

“What is it? What’s wrong. I need the loo.” Karen continued to jabber.

Pushing the living room door open, Sophie first noticed the coffee table. A sheet of artist’s paper with toddler-sized handprints lay within a puddle of black watercolour paint that covered the table and dripped onto the carpet.

Karen saw the mess over Sophie’s shoulder and finally shut up. It was then they heard it. A faint moan. Sophie froze. Karen froze. It came again.

Sophie was the first to move. “Nathan!” She ran from the room, frantically calling her child’s name.

The sound, animal-like, was louder. It was coming from upstairs.

Sophie took the stairs two at a time and reached the landing in seconds. Karen was not far behind.

The girl sat on the floor, back against the wall. She was sobbing. “I’m so sorry. I’m so sorry.”

Sophie ran past her into Nathan’s nursery. His cot was empty. Sophie knew without being told where Nathan was. She took a calming breath and walked back across the landing and into the bathroom. There, in the bathtub was Nathan. His chubby little arms and legs. His growing mop of dark curly hair. He was just under the water, eyes closed, still, lifeless.

Sophie reached down and snatched her baby from the water, holding him, trying to squeeze some life back into his little dead body. She knew it was no good.

The only sound was Lottie, the fifteen-year-old babysitter’s sobbing from outside the bathroom door. “I’m so sorry. I’m so sorry.”

The screenplay opening episode is here