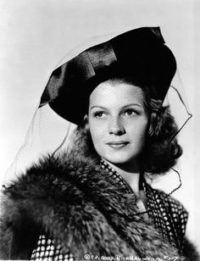 The Going Away Hat

The snow was all a flurry
With everybody in a hurry
Trying to find some shelter from the cold.
Then a little sign I spied,
Said, “Welcome Stranger, come inside –
Articles here are bought as well as sold.”

So I quickened up my pace
As I pickened up my case
And made straight for that welcome sign.
As I entered there within
I said, “I see you buy things,
Might you have an interest in mine?”

The dealer said, “I’m sorry,
Unless what you have is holly
There’s nothing I need right now, I fear.
But if you do have something good,
Well, maybe then you should
Come back and see me at the start of the New Year.”

He could tell then by my face
And the way I held my case
That I had something quite precious there to show.
“Oh please kind sir, I reckon
This won’t take us a second,
If you don’t like what you see, then I’ll go.”

He said. “You have five minutes, but no more
Then I’m locking my shop door,
I must still go and buy a present for the wife.
I can’t go home with naught
Not a thing, nothing bought
That would be worth far more than my life.”

I said, “This might just answer all your prayers.”
And as he gazed at me and stared
With a look that said, “I doubt that!”.
I pulled out from my case,
A bonnet covered in white lace,
He asked, “Is that it? – Just the hat?”

“Not just any hat,” I said.
“It has graced somebody’s head
Someone, I loved dearly, I must say.
I am telling you this flat,
This is the going away hat
That my mother wore the Christmas she went away.

A Christmas twenty years before –
A bridal gown she wore
With her childhood sweetheart as her groom,
And they drove off hand in hand
To a place near Camber Sands
For the perfect Yuletide honeymoon.

And with this hat pinned to her hair
There was nothing to compare
Her joy and her love for her new man.
But just two short weeks later
He caught a big Rye Harbour freighter
And was last heard of somewhere in Japan.

Of her grief, there was no telling.
Then her tummy started swelling
Then out popped yours truly nine months later.
Now sadness became joy
At the arrival of this boy
I guess we’d have to manage without Pater.

Then one day another child she carried
And as a consequence remarried
A nice young shepherd from up near Udimore.
With this hat back in its place
Crowning the prettiest of face,
So young and happy, she never hoped for more.

But the child was early born
That Christmas of the great storm
Whilst the shepherd was out tending to his flock.
He was trying to get them in
When the lightning did for him.
Mother never really recovered from the shock.

She lasted five more lonely years
But could never hide her tears,
She’d lost two men – but gained two we would say.
And she would look at us and smile
And feel happy for a while.
Until the time she thought of Christmas day.

Then one Christmas Eve she sighed,
“I must leave you soon, don’t cry.
But be brave, especially for your little brother.”
Then she put on her Sunday best.
This hat, red shoes, her favorite dress.
Kissed me on one cheek, and then the other.

Then like that she went away.
On that cold December day.
When the snow was settling outside on the ground.
As she closed her eyes to sleep.
I tried so not to weep.
Soon she’d be helping Santa with his round.

The years moved on so quickly,
But my young brother grew up sickly.
Though I took good care of him as a rule.
By doing some odd jobs
Like rolling wool and chopping logs
For a few hours every day just after school.

This Christmas the money’s dried up.
And with it has our luck.
And there’s not a lot that we can do for that.
The only chance to save us
Is sell the one thing that mother gave us.
And that is why I’m offering you this hat.”

He said, “Your tale has touched a nerve
And I’m sure that you deserve
At least enough to raise a Christmas meal.
Fifteen pounds should be plenty.”
I said, “Make it up to twenty.
Then I think that you might have yourself a deal.”

As I left that dealer’s shop
Something outside made me stop,
It was my dearest mother’s youngest son.
His face was full of pain,
As he asked me to explain
All about the deed that I had done.

“You know our mother’s hat,
And how we could never part with that?
Well, I’m really sorry for what I’m about to say.
But you have to raise a glass
To Christmas future, now and past.
I’ve sold seven of those hats here in Rye today!”